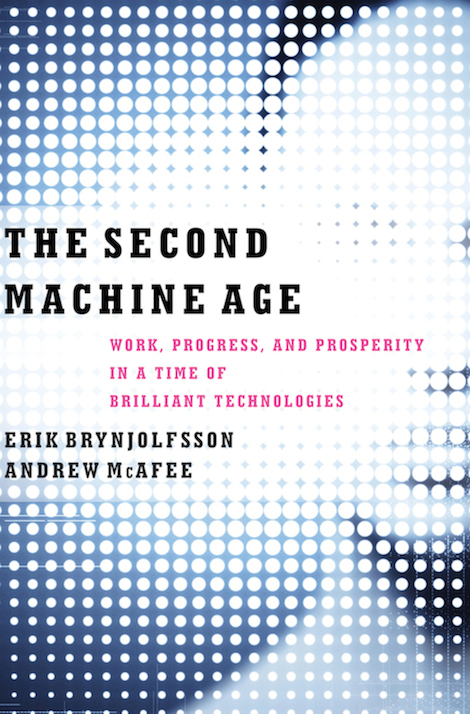 We are in the midst of a remarkable, and potentially terrifying “second machine age,” in which digital technology is evolving at a boggling pace in its power to perform an amazing range of functions in our economies and our lives. Erik Brynjolfsson and Andrew McAfee profile this change in their book, The Second Machine Age. The book is deeply engrossing (though I confess to having found some of the middle chapters on economic theory less engaging, though though that’s surely my flaw not the book’s), and I recommend it for those with a general interest in technology, or a particular in the Internet, digital culture, media and education and workforce training.

The first machine age was the Industrial Revolution, in the late eighteenth century. That age corresponds with  the gradual slope of progress on the timeline human history bending suddenly into to a steep spike; driven upwards by ability of the steam engine and other machines to exponentially replace human and animal muscle power with machine power.

The Second Machine Age authors argue that the exponential increase of digital computing, processing and transmission power is going to drive an equivalently sharp spike on the timeline of human history.

One key to why some chapters of this book left me with tingling enthusiasm, anticipation and grave trepidation racing up my spine is the notion of exponential progress in digital technology – Moore’s law.

Moore’s law (not a law) is an observation by Intel cofounder Gordon Moore that the number of transistors on a chip doubles about every two years. In other words, digital technology is getting simultaneously smaller and more powerful at an exponential rate. Moore made this observation in 1965 and the technology has been keeping pace ever since. This helps explain why my first desktop computer, which I acquired about 33 years ago when I was 10 or 11 years old, the Commodore VIC-20, boasted a 1.02 MHz chip and 5 KB of memory and required a landline phone to connect loudly to a local bulletin board system at the community college, and my current iPhone 5S (already outdated) can boast a 1.3GHz  processor and 16GB of memory, in a 7.6 mm thick, 4 gram package that slips into my jeans’ pocket and is in constant communication with satellites in orbit around the earth.  (For those who would like more context, 1.3GHz translates to 1,300,000,000,000 MHz.)

Brynjolfsson and McAfee write: “Computers and other digital advances are doing for mental power—the ability to use our brains to understand and shape our environments—what the steam engine and its descendants [Industrial Revolution] did for muscle power. They’re allowing us to blow past previous limitations and taking us into new territory. How exactly this transition will play out remains unknown, but whether or not the new machine age bends the curve as dramatically as Watt’s steam engine, it is a very big deal indeed.”
One example of this is the driverless car – the first DARPA Grand Challenge for driverless cars took place in 2004, and not a single vehicle even finished the course, no prize was given. Fast forward a mere ten years and Google driverless cars were navigating our public freeways while Google staffers rode along, observing without needing to take the wheel. The navigation systems are powered by technology, bpth processing and sesnsor, that scientists couldn’t have predicted in 2004, or at least they couldn’t have predicted would have been available as soon as 2014.
Other advances in machine autonomy and learning mean that tasks once thought the exclusive province of humans – take writing for example – are now being tackled by machines with semantic systems so evolved they can understand the context of Jeopardy questions, including ones relying on puns and wordplay.
Very few rote, or even moderately complex, data tasks are going to be available for humans to earn a living by as the power of digital technology continues to double every few years. The result of this continued exponential improvement will be an era where the behavior of technology seems as much like magic as science. In fact, when we really stop and consider how rapidly technology has integrated into every aspect of our lives in even the last ten years, making an always-on, always-connected, internet-of-things culture, we’re already there.
The disturbing part of that techno-magical future is the growing potential for economic inequality and the need for political solutions that will enable sustainable and productive lives for humans whose factory jobs have been replaced by robots and who now find even their “knowledge worker” jobs at risk in the face of ever more autonomous thinking machines.
What’s Needed To Succeed In A Second Machine Age Economy?
“Technological progress is going to leave behind some people, perhaps even a lot of people, as it races ahead,” the authors opine. “As we’ll demonstrate, there’s never been a better time to be a worker with special skills or the right education, because these people can use technology to create and capture value. However, there’s never been a worse time to be a worker with only ‘ordinary’ skills and abilities to offer, because computers, robots, and other digital technologies are acquiring these skills and abilities at an extraordinary rate.”
So what skills do I was a worker, as a leader, and most importantly, as a parent, focus on to insure those in my charge have the special skills they’ll need to use technology to create and capture value? I’ll give you a sneak peek at the answers, found in a chapter near the end of the book. Here are the skills the authors advise we focus on:
They point to the Montesorri school approach as exemplifying these principles, and point  the  high number of tech company innovators who demonstrate the above skills and who had a Montesorri school background, including Google’s founders, Wikipedia’s founder Jimmy Wales, and Amazon founder Jeff Bezos.
For my part, I’ve seen these principles play out in the evolving workplace during my professional years. Especially where digital technology innovation is involved, people’s success is directly proportionate to their autodidacticism. In order to embrace and succeed in this “Second Machine Age,” we’ll need to learn to turn the whole world into our own “self-organizing learning environment.”

Quick-Start Primer for a Low-Carb Diet

A New Library of Babel: Borges, Fake News and Philosophy for All

Unmooring, Realignment and Restoration: Notes From The Apartment

Setting Out For The Beach

On Writing, Running, Shame and Authenticity