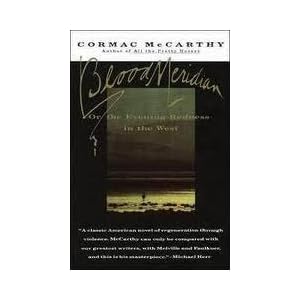 Cormac McCarthy’s Blood Meridian, Or the Evening Redness in the West, is not an easy read. The language is archaic and dense, the philosophy is weighty and ambiguous, and the story is as violent and gory as the most revolting contemporary horror movie. Nevertheless, the reward for the hard work of persevering beyond the first half of the book is an intensity of personal experience that I, at least, hadn’t had from a book in a quite a few years. I plodded through the start of the book, and by the end was so engrossed that I finished reading it in a five a.m. airport security line in Houston on the way to San Diego. It was an appropriate geography in which to be situated for the conclusion of this story of a band of vile scalp hunters on the Texas-Mexico border 1850-51.

I won’t attempt to write a criticism of the book; that’s been done by better readers, among them Harold Bloom, who calls it “the ultimate Western, not to be surpassed,” and says,”no other living American novelist, not even Pynchon, has given us a book as strong and memorable as Blood Meridian […].” High praise, and worth noting that Bloom himself started and stopped reading Blood Meridian twice before actually finishing the book which he now endorses so highly.

The story follows the exploits of the Glanton gang, which has been commissioned to kill Indians and eventually turns to more general murder and depravity. The story relies on two characters as its frame and focus, the Judge and the Kid. The Kid is an anonymous 16-year-old, reared in violence and already a master of it, though with something of a conscience left in him. The Judge is an equally anonymous giant albino with no hair, not even eyebrows.  He speaks all languages, is a natural historian, scholar, musician and philosopher of war. He’s a murderer and children seen in his vicinity turn up missing. He’s also a helluva dancer.  The book begins with the Kid and the Judge, and ends with them in a powerful, frightening encounter, and in between spans a majestic and terrible landscape of death in vast Western spaces. It asks many questions and demands the reader ponder them long after the last page is read.  Bloom says McCarthy is an heir to Melville and Faulkner, and there are parallels between this story and Moby Dick.

Here I’ll give just a few of the dozens of passages I highlighted when I was reading, some for further reflection and some for the beauty or strangeness of the language.

“For this will to deceive that is in things luminous may manifest itself likewise in retrospect and so by sleight of some fixed part of a journey already accomplished may also post men to fraudulent destinies.”

“They rode infatuate and half fond toward the red demise of that day, toward the evening lands and the distant pandemonium of the sun.”

“The flames sawed in the wind and the embers paled and deepened and paled and deepened like the bloodbeat of some living thing eviscerate upon the ground before them and they watched the fire which does contain within it something of men themselves inasmuch as they are less without it and are divided from their origins and are exiles. For each fire is all fires, the first fire and the last ever to be.”

I leave this as a brief recommendation of a book that I imagine will occupy my thoughts for some time to come, and one of the few that I recall, upon so  recently finishing, considering rereading immediately.

A New Library of Babel: Borges, Fake News and Philosophy for All
Reordering books on shelves
Amazon/Audible's Whispersync for Voice a Bibliophile's Fantasy
There's a snake wrapped around a newspaper in my mother-in-law's fridge: adventures in language learning
Complete Lovecraft for EPUB
How to add EPUB books to your Kindle, take advantage of Google's massive free library
'Born to Run' author Christopher McDougall on The Daily Show
TechCrunch says skip the business books, read sci fi
In Explorers of the Infinite Coffey reveals the spiritual and paranormal experiences of extreme athletes

A New Library of Babel: Borges, Fake News and Philosophy for All

Unmooring, Realignment and Restoration: Notes From The Apartment

Setting Out For The Beach

On Writing, Running, Shame and Authenticity